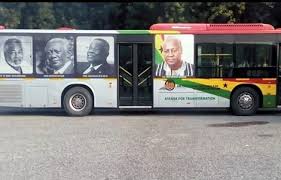 On Monday 22nd February, 2016, the case involving the seven citizens and the Ministry of Transport and the Attorney General was called for the first time in court. Court proceedings took place at the Human Rights Court 2, Accra. The Respondents (that is the Minister of Transport and the Attorney General) had failed to file an affidavit in opposition to the substantive application for enforcement of human rights within the stipulated time provided by the rules of court. Thus the Applicant filed for the matter to be set down for hearing today.
In court, the judge informed counsel for the Applicants that the Respondents had just filed an affidavit in opposition dated 19th February, 2016. Further that in the affidavit in opposition, the Respondents had raised a preliminary legal objection as to the procedure for the commencement of the action. Consequently the learned judge directed that both counsel address the court on the preliminary legal objection by filing legal arguments. The case was adjourned to 9th March, 2016 for continuation.

For those at sea, on 22 December, 2015, a group of civic minded citizens in collaboration with the legal team of the CitizenGhana Movement sued the Minister of Transport and the Attorney General on the GHC3.6million Smartys Bus Branding Scandal. The suit, numbered HR/0037/2015 was commenced at the Human Rights Court essentially for an enforcement of the fundamental right to information under Article 21(1)(f) of the Constitution of the Republic of Ghana.

An official search conducted at the registry of the honourable court revealed that although the processes were served on both the Ministry of Transport and the Attorney General on 23 December 2015, as at 28th January, 2016, neither of them had filed any reaction to the application by these citizens.

Just a simple Ghanaian trying to find the best in our society. I may be fun, I may be interesting, I may be funny, I may even be foolish or intelligent, but it is all based on the mood in which you find yourself. I believe our minds make us who we are. Know that, pain, no matter its 'unbearability', is transient. Unburden or delight yourself for a while in my writings please. And all corrections, advice and opinions are welcome. Know that you are the king, queen or royal on this blog. :)